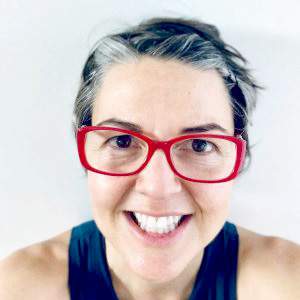 Kylie is a 280+ hour registered yoga teacher, the mum of a zesty little human, a world traveller, skier, & lover of gluten-free cinnamon donuts. Fun fact: she once upon a time lived under various palm trees in the tropics with her now husband, enjoying her years there as a scuba diving instructor.

Kylie’s first memory of yoga was as an energetic pre-schooler in the 70’s, dancing around her lounge room taking in Swami Sarasvati on morning TV while her mum practiced. She’s told she tried out a few asana with her mum & Swami then, but even so Kylie did not actually ‘find’ yoga for herself until the next century!

Although she has practiced yoga for twelve years now it was not until Kylie found real solace in it during a period of anxiety and depression that she realised what a positive force for change yoga truly can be. That was when her desire to help others through yoga began.

Offering an alignment based slow flow style, Kylie teaches to help others connect with their compassion and courage, to shine brightly.

⚡️Physio - Yoga - Pilates - Wellness⚡️
.
Join our tribe and sign up to our virtual studio TriBalance TV. We can’t wait to connect with you 🙏💜

When you need rest, clarity, peace, a reset, conne

Our next Radical Rest workshop with @emmabaker.med

We’ve got new Therabands in the studio for Pilat

Your body may feel very different from day to day

Kick off Your Yoga Practise with a FREE Introductory guide